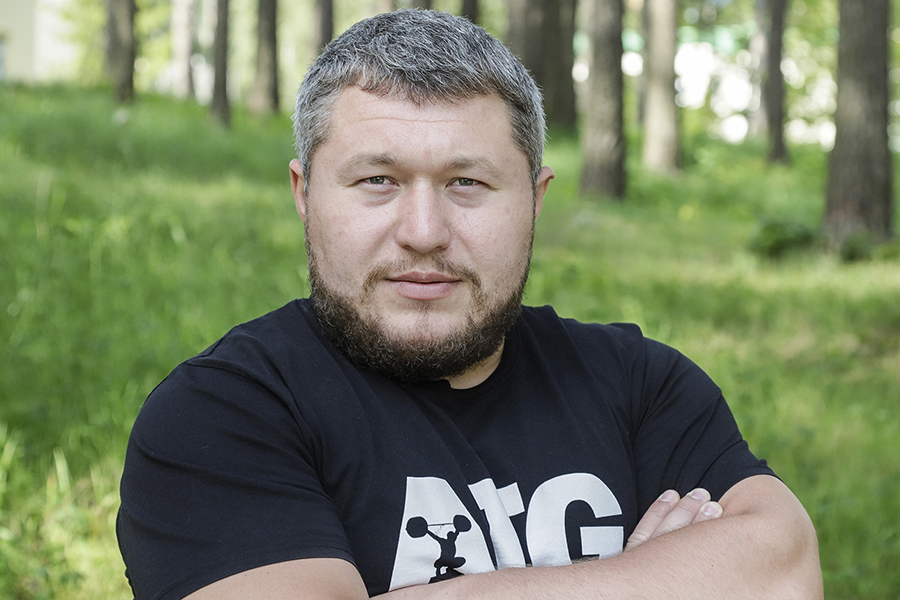 He raised and holding

The hair - gray hair, voice - unusual seriousness. Many Andrei Aramnau still perceived as capable of any demarche rake, which by nature has been given over to lift the weight of your head, comparable to a small car. After the triumph at the Beijing Olympics, our champion weightlifter many times got into all sorts of unsavory stories, that many still refuse to take it seriously. He also prove the opposite and tries. He comes into the room and raises the bar, Getting ready to speak on soon world championship and show, that he should receive only situation in Belarus after all the doping scandals license for Olympics.

- This championship is actually the first step for me on the way to the Games. Prior to that, two years, count, only trained. Great results from you do not expect. At this stage, the main thing - repeat, that lifted up European championship (411 kg in the double-event brought Andrei Aramnau silver. - Note. Security) and begin to work with a view to the next European Championship. On it will be decided, who of Belarusian weightlifters will travel to Tokyo. Now the team has two quotas: one female, one male. Competition has become a very serious. "Rushing" Youth, guys are willing and able to lift a lot of. I'm trying to take the experience.

- That, that all were suddenly forced to compete even with the guys from the other weight categories, impact on relations within the team?

- We have a fairly close-knit team, no conflicts. Although I see, that some of the children began to treat others wary. The national team of young, the guys are very ambitious. we are Vadim Streltsov - the last of the Mohicans. Representatives of the previous generation, while Streltsov lately can not dial in good shape. But I do not think, we just give in young Olympics. These games may be our last, but everyone understands, he would go, who is stronger.

- In previous years, you are always happy to give young people advice. Behaving blog on the Internet. Now, comes, so that you can grow, who then will throw you out of the composition of the Olympic team?

- I do not argue. Who wants to get away from me for advice - that it will receive. Although I find myself thinking, that many children simply do not need it. Such "hardcore boys", which in this case is considered, that all know and can. But what is strange: I do not now see around me really ambitious athletes. I'm in 18 years on every corner told, I want to win the Olympics, world championship. Now they all want to raise a lot of, but it will be happy and the place near the podium. Or European title. They have not yet formed a championship character.

- it can be learned?

- I am in some way fortunate. When I got into the national team, there was, eg, gene Oleshuk. It's just a unique person: for less, than the world records, he generally disagreed. Constantly at some courage, which can infect all the others. I trained with Andrei Rybakov. It was a team of real Olympians, each of which wanted to reach their limits. Looking at them, I also realized, how to relate to the sport and his place in it. I wanted to win, and the current generation - to train and raise.

- In weightlifting changed weight categories. Your world record in the snatch - 200 kilograms - has now become an eternal ...

- Good news: I made sure, what he wanted. Now ambitions gradually grow, sooner or later, those numbers will rewrite, but as long as someone does not have enough equipment, someone - charge. Although there are here with us Eugene Tihontsov, who updated my junior record. I him, true, I set at the World Championships already in 16 years old. Only I began to speak in this category - not the achievement, which worry. Although this Tihontsov - a very strong and talented athlete. He's a lot stronger than me, which set records in this category 94 kilogram. He would have a little more in the technique and add stability: I somehow just took the, that was able to squeeze themselves on the platform without a trace. Zhenya this is not yet enough: force him to reserve, but often can not fix post or send it on the desired trajectory.

- If he ever set a world record and become the Olympic champion, be jealous?

- there is no eternal record, and if the world record holder and Olympic champion will be Belarusian, I'll be very happy. Although, of course, I want to, that my achievements have stood longer. Yes, category change, but weightlifting society still appreciates achieve somewhat differently, than it is in the official records. Everything, eg, know, I installed a world record in 20 years old. Therefore, the current 20-year-olds compared with a secretly me. And for records, I put in 20 years so my weight, until now nobody has been able to approach.

- Who in our young team the most talented?

- Celebrate anyone not want, but I see, that each of the guys some items are missing. But it does not matter, but compare with the national team, which I once came, It is not worth it. Now the average age of the team - in the area 20 years old! These guys still ahead, and they were about to unfold. If they manage to make it to the full, we will be the strongest and level team in the world.

- Do you see yourself in this command?

- At the moment I do not see myself even in Tokyo. Just train and hope, that the body is able to handle the load, that awaited him. It is difficult to enter the twilight of a career best result, although I feel: stocks have. In addition, for the first time in a long time do not have to seek financing, although the situation is straightened only two months before the World Cup.

- At the European Championships you raised 411 kilograms. The refraction at the World Cup - it's a lot?

- I would like to be among the winners. While I do not have championship ambitions. Simon Martirosyan - very strong, though my 411 - the third result of the season in the world, and I look forward to wipe the 430. Many, I see my blog, I squat with decent weights, already almost a medal around his neck hung. But weightlifting is important, to be equally strong and hands, and legs, and back ...

- Blog for you now - it is a way of earning, hobby, the way of self-expression?

- I want to leave something of themselves on the Internet. People to know me, and evaluated not only by the publications in the newspapers, where often wrote blatant nonsense, but also by, I'm very willing to communicate. Show this yourself, instead of the image, which in recent years have drawn.

- You made it a lasting reputation?

- One side, this is good. At that time,, when I was out of sport, treating injuries, do not forget about me. It's the worst. And someone always remembered, there's some news. Different, of course, news, but still constantly ringing with some polls, interview. I stayed afloat, and it was easier to get back into the system. Although the blog, I did not catch HYIP. Just tell about their experiences. And I earn on their knowledge.

- It happened, I had a lot of how outstanding results, and injuries, that I was able to overcome. A plus, Alas, impressive career "internet terrorists" - as it happens… But seriously, then I get to tell people things useful for them in plain language. Once at the beginning of my career I was absolutely curves, korchavym and nontechnological athlete. But I knew how to listen and watch the leaders. I copied those guys, who got better. fishermen, eg, It was the most technical in the snatch. I tried to learn from it. Oleshuk gene was also magnificent "techie". As said our sports psychologists, I - a man with a vague personality type. I can adjust to any situation and to copy any of the athletes. Now as easy for me to manage it to someone convey.

393 kilogram. With this amount of money in the snatch and the clean and jerk in the 2006 year at the Junior World Championships Aramnov won a silver medal. A year later, he won a similar tournament with a score of 407 kilograms.

411 kilograms. Total, Aramnau brought this year a silver medal at the European Championship in Batumi.

436 kilograms. Total, which 2008 He was allowed Belarusians to climb to the highest step of the podium of the Olympic (200 kilograms in the snatch, 236 - in the clean and jerk). In this challenge, this result could not neither produced after rechecking doping tests.