Athletes work hard, extracting medals. After the rays of spotlights are inspected on both sides: where the sponsors and advertising contracts? Many athletes believe, that the presence of victories and records determines the interest of sponsors. Unfortunately, far from it. In private conversations, some athletes complain of undeveloped market relations between business and sport. But unless they themselves do not need to make some effort, business to pay attention to them?

At the same time, members of the local advertising market call up the agency in search of a hero of the advertising company from the world of sport - well,, let the someone from sportsmen! But only notable, with an audience of 20 000 thousand in social networks, with good coverage and reputation. And it turns out, necessary research and measurements, help to determine the popularity of a particular athlete, to trust him to become the face of the advertised product.

Our proposed rating will help meet one and another. Athletes, hit the top-20, will see its popularity, proven algebra. Others can understand, What are the strengths of their colleagues (in addition to the records and titles) and, possibly, to begin work on their marketing potential. For brands ranking will be a guide to the world of sports celebrities Belarus. Especially such a rating has been held for the third year.

Research participants were acting Belarusian athletes, have achieved significant sporting achievements 2019 year. The primary list of candidates included more 130 names. Then the athletes were evaluated by the following criteria:

To assess the quantitative interest in the athletes had used the service WordStat. This tool shows the absolute number of results in the search results of interest names. taken into account, how many times in the past year (with 1 January 31 December 2019 of the year) Internet users to request information on the rating of participants.

The Google Trends uses a relative measure of popularity (Unlike WordStat), but allows a comparative analysis of popular searches by name athletes for the selected period of time. Service includes web-search news, pictures and YouTube. Comparison charts the popularity of queries on each athlete's possible to determine the place in the list.

The number of subscribers in social networks

The main factor, allows to evaluate popularity, It is the size of the athlete audience in social networks. For rankings were used the number of subscribers in Instagram, as the most used social network by athletes (Data are as of 1 January 2020 of the year).

To participate in the expert survey were invited 20 specialists, are the leading roles in Belarus in sports management, general and sports marketing, journalism, sports and education in the field of PR. Each expert has called on 20 names of athletes, assessing them in terms of attractiveness for a mass audience, reputation and achievements in sports 2019 year. In the survey were named 75 out of a total number of applicants.

Expert assessment combines balance fame and importance of sporting achievements, as well as take into account the perception of the tone of athletes in other areas (public and social projects, family life, and others.). 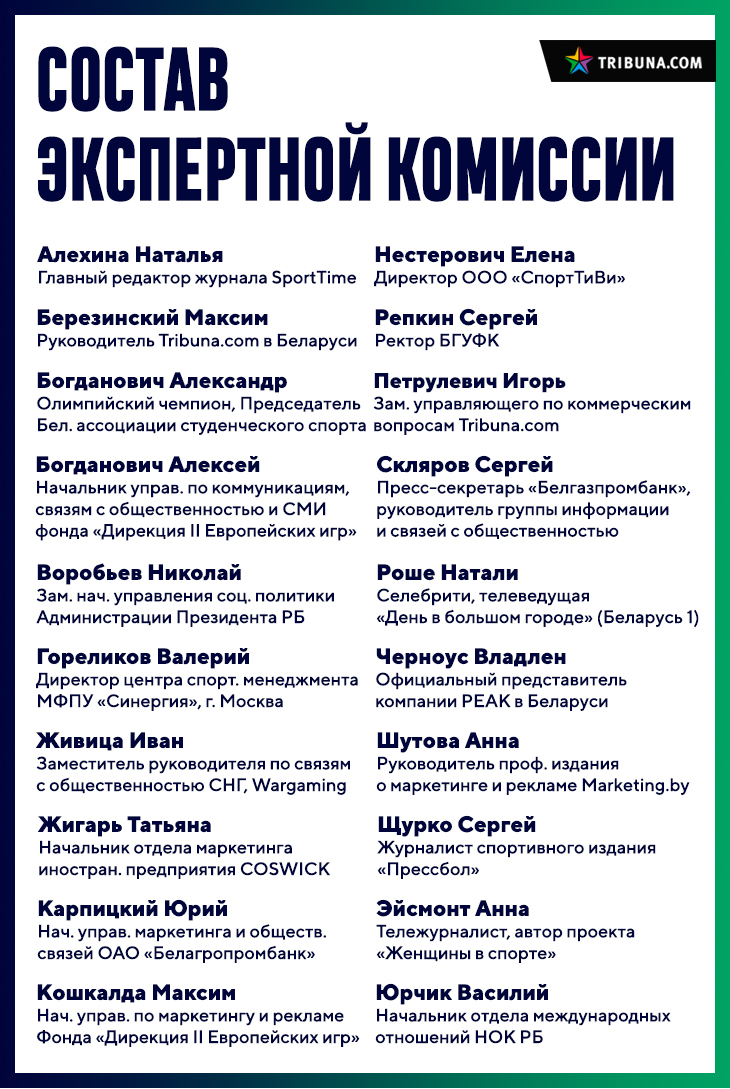 Data on all of the criteria to be tabulated. Amount dialed seats converted into the final scores for special formula.

Aryamnov for the year gathered a bunch of titles - the best athlete of the year in Belarus, the best weightlifter of Belarus. Andrew has set a goal - to become a double Olympic champion and it is planned to. In September, he won a silver medal at the world championship in Pattaya, and is one of five candidates for the trip to Tokyo. Different can be said about Aramnau, given his quarrelsome character, errors of youth and violent temper. But it is necessary to look at the comments under the post on the day, when it was to win a medal in Thailand and you will see, What a wave of positivity and pride of fans descended on the athlete. Aryamnov - the main newsmaker and trendsetter among Belarusian athletes. Compete with him in this could be perhaps that Artem Milevsky, if I could take part in the ranking as the Belarusian. Aramnau I have an opinion on any occasion, whether war WADA c doping in Russia, or the name of the street in his native Borisov. The credit rating were to figures from Instagram, but there is an excellent Aramnau YouTube channel, which grows and develops, Not surprising, what the 2019 year Andrew was able to climb in the rankings on 8 steps up.